Data for analysis of the 1881 census was obtained from several on line sources, which were then compared and combined to obtain a final data set. This process preceeds the anaylsis below:

Individuals were included in the analysis unless:
* after examining the original, it was clear the name had been mis-transcribed
* after examining the original and doing further research, it was possible to establish that the name had been mis-recorded in 1861.
Details of individuals not included, were filed separately in case later analysis was needed.
Those excluded for these reasons were (9):
(1) A lodger from London, residing in Yorkshire. 1881 Census checked and mistranscribed, should be Cullum (in all sources except UK Census on-line )­
(2) A farm servant, born in Worcetershire and living in Gloucestershire1881 is recorded as  Pullum but on the 1871, 1901 & 1911 censuses is Pullom. (in all 4 sources)­
(3 – 5) Family of 3, born and residing in Middlesex (further West than most Pullums) mis-transcribed (not clear) as Pullum in 1881 but is Pulham on all other censuses (source = on UK-Census online only) ­
(6 & 7) Husband & wife, living and residing in Shoreditch. Census checked on 1881 census are recorded as  Pullum, but on 1901 & 1911 censuses are Pulham (in all sources except UK Census on-line )
(8) ­A farm servant born in Warwickshire and residing in Satffordshire. Chesus checked and may be Pullum, no other census records that fit found. A possible equivalent birth with name Pullem (source = on UK-Census line only)­
(9) A 12 year old girl found on UK Census on-line only, who cannot be traced elsewhere and details suggest that it may be a repeat of one of the others.

Therefore 65 of these records were used. ­
The sources of these were:

The individuals found were then compared to records on my existing family tree.
On the existing tree were an additional 18 individuals known to be alive in 1881;
4 were women with the maiden name Pullum but were now married.
For another 12,  I also have not traced the 1881 census (including a child born 27 Mar 1881, Bap 17 Apr but on the census night , 3 Apr,  was not with his family and also the eldest son of a family of 4 that had been found.
While looking for the remaining 2, I found 2 mis-transcriptions:
One as Pulham – a woman living with her married paternal aunt)
A family of 4 as Pullman (3 were not known to be alive at time before finding this census. 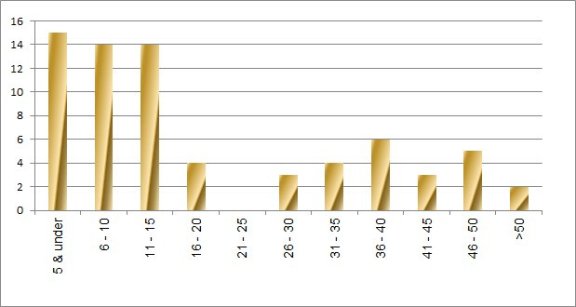 Of note is that 2 of the marriages were between first cousins, thereby increasing the consanguinity.

There were 13 households of 11 families and 2 individuals.
(click to enlarge) 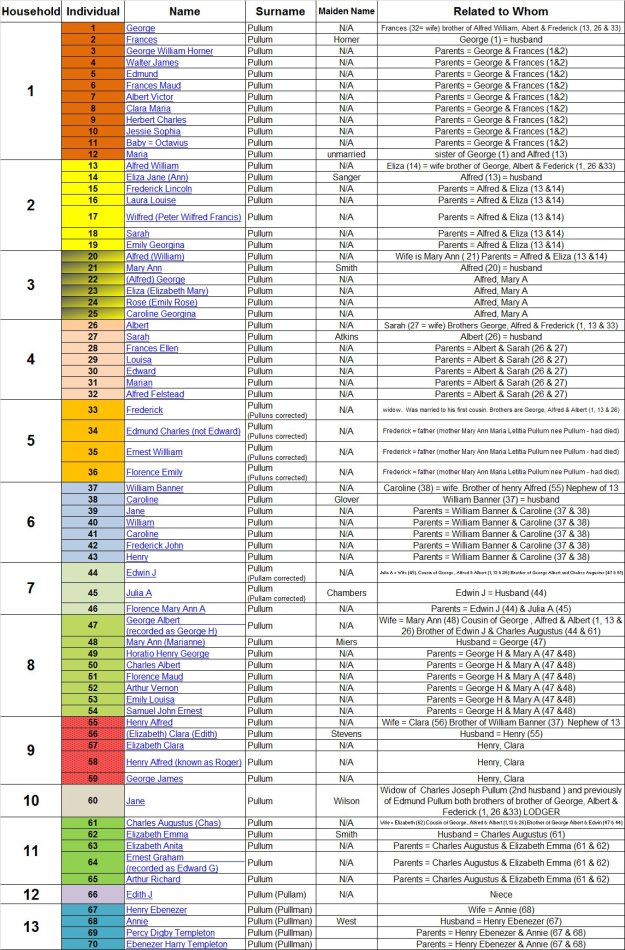 The 11 households and 2 individuals were at 12 addresses
i.e. one address includes 2 households but this is a married man who is living with his parents and siblings (as well as his wife & children)

All are in London/Middlesex (11 south of the river)

All individuals were living in a small area of London / Middlesex.
2 households (11 individuals) were south of the river Thames, the rest were all north.

11 of the individuals were “wives” i.e. were not born Pullum.
one of these had been married twice to brothers Edmund and Charles Joseph Pullum
the wife who was born a Pullum, i.e. first cousin marriage had died 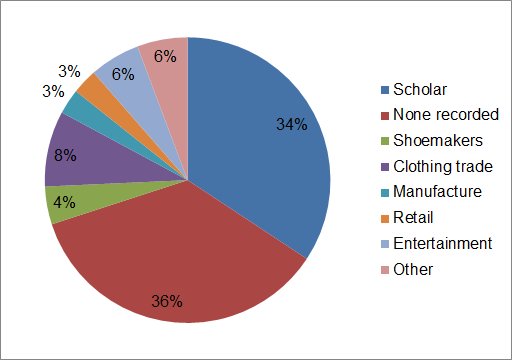 There were 11 households and 2 individuals at 12 addresses
i.e. one address includes 2 household but this is a married man who is living with his parents and siblings (as well as his wife & children)
All were living in London/Middlesex (11 south of the river)
The distribution between 6 places was fairly equal.

11 of the individuals were “wives” i.e. were not born Pullum.
Of the remaining, 81% were born in Middlesex with a further 5% in London.
This is a total of  86% born in what is now London
(Note: 10 Hackney recorded as Middlesex and one as London)

The majority (70%) had no occupation, being wives & children.
61% of those with occupations were in manufacturing/retail industries
Shoemakers (3), Clothing trade (6), Leaf makers (2), Wholesale Grocer, Confectioner.

A tree including all individuals has been constructed.